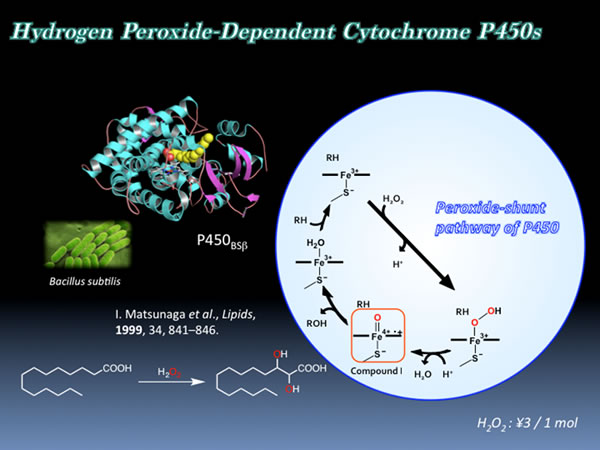 P450BSβ is one of hydrogen peroxide-dependent P450s that utilizes hydrogen peroxide as an oxidant and efficiently catalyzes site specific hydroxylation of fatty acids. The crystal structure of a palmitic acid-bound form of P450BSβ reveals that the carboxylate of palmitic acid interacts with Arg-242 located near the heme showing that the general acid-base function for facile generation of the active species is provided by the carboxyl group of the bound fatty acid. This unique reaction mechanism contributes to its high substrate specificity and P450BSβ never oxidizes substrates other than long-alkyl-chain fatty acids. 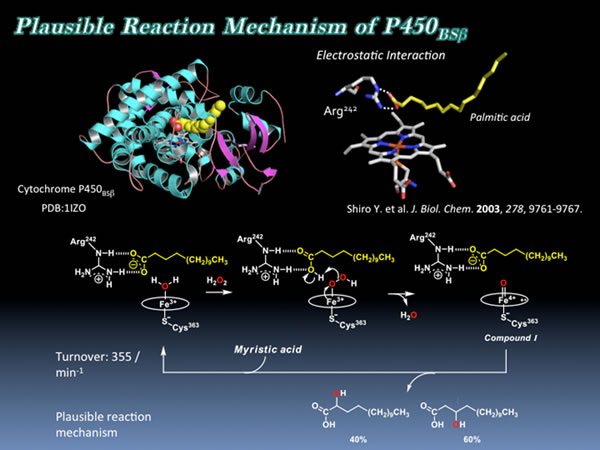 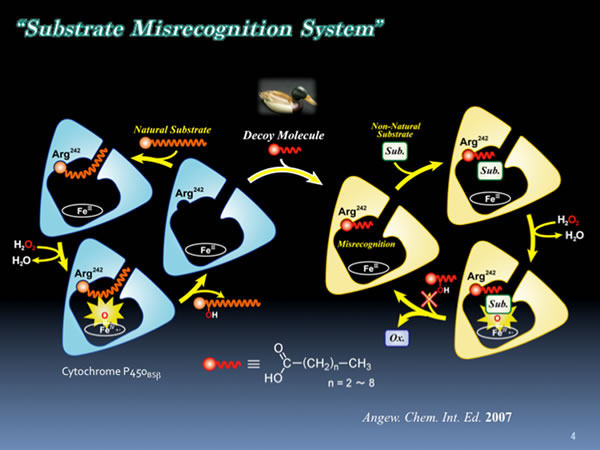 P450BSβ never oxidizes the substrates other than fatty acids having long alkyl chain. However, we demonstrated that P450BSβ is able to oxidize a wide variety of non-natural substrates in the presence of molecules having a carboxylate group with a series of short-alkyl chains. The reaction never proceeded without these molecules, and thus P450BSβ starts to catalyze oxidation of the non-natural substrates with the help of these short-alkyl carboxylic acids. In the case of short alkyl-chain carboxylic acids, their alkyl tails would be too short to reach to the hydrophobic channel of P450BSβ, resulting in the loose fixation of the short alkyl chains and failure of the hydroxylation. We, thus, have referred the short-alkyl carboxylic acids as ‘‘decoy molecules’’. 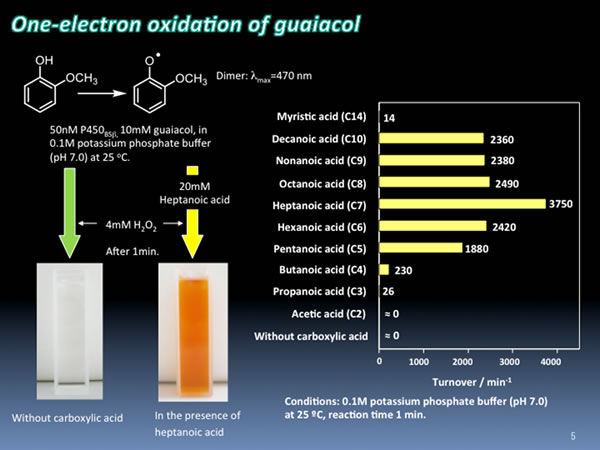 One-electron oxidation of guaiacol was catalyzed by P450BSβ at a high reaction rate in the presence of carboxylic acids with short alkyl-chain and heptanoic acid gave the maximum rate, 3,750 turnover/min/protein, among carboxylic acids examined. On the contrary, no appreciable reaction was observed neither in the absence of carboxylic acid nor in the presence of myristic acid under the same conditions. These results clearly indicate that the decoy molecule turns on the catalytic oxidation cycle of the P450BSβ reaction. P450BSβ may misrecognizes short alkyl-chain carboxylic acids as the substrate owing to its structural similarity and catalyzes the oxidation of nonfatty acids. The results imply the decoy molecule keeps the P450BSβ catalytic cycle always ‘‘on,’’ while the binding of long alkyl chain in the active site turns ‘‘on’’ the oxidation cycle. We also demonstrated that monooxygenations of non-natural substrates, such as epoxidation of styrene and hydroxylation of cumene and ethylbenzene, were catalyzed by P450BSβ in the presence of decoy molecules. That the catalytic activities are dependent on the alkyl-chain structure of the decoy molecule indicates the catalytic activities must be further improved by the design of the decoy molecule.

We also demonstrated the stereoselective styrene epoxidation catalyzed by P450SPα with carboxylic acids as decoy molecules. The crystal structure of a (R)-ibuprofen bound-ochrome P450SPα at 1.9Å resolution reveals that the carboxylate group of (R)-ibuprofen serves as an acid-base catalyst to initiate the epoxidation. The stereoselectivity of styrene epoxidation was largely affected by the chirality of ibuprofen and (R)-ibuprofen enhanced the (S)-styrene oxide formation. The docking simulation of styrene binding in the active site of (R)-ibuprofen-bound form suggests that the orientation of the vinyl group of styrene in the active site agrees with the (S)-styrene oxide formation. This unique strategy using the chiral-substrate-analogues allows us to alter the enantioselectivity of enzymes without any mutagenesis and thus contributes to development of novel asymmetric biocatalysts. 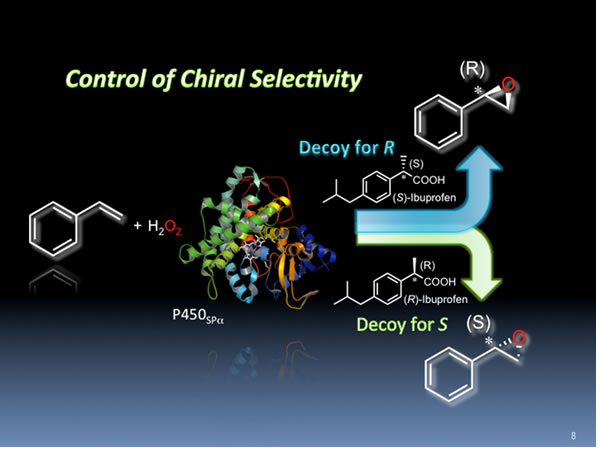 The crystal structure analysis of P450SPα with palmitic acid

ochrome P450SPα(CYP152B1) isolated from Sphingomonas paucimobilis is the first P450 to be classified as a H2O2-dependent P450. P450SPα hydroxylates fatty acids with high α-regioselectivity. Herein we report the crystal structure of P450SPα with palmitic acid as a substrate at a resolution of 1.65 Å. The structure revealed that the Cα of the bound palmitic acid in one of the alternative conformations is 4.5 Å from the heme iron. This conformation explains the highly selective α-hydroxylation of fatty acid observed in P450SPα. Mutations at the active site and the F-G loop of P450SPα did not impair its regioselectivity. The crystal structures of mutants (L78F and F288G) revealed that the location of the bound palmitic acid was essentially the same as that in the WT, although amino acids at the active site were replaced with the corresponding amino acids of ochrome P450BSβ (CYP152A1), which shows β-regioselectivity. This implies that the high regioselectivity of P450SPα is caused by the orientation of the hydrophobic channel, which is more perpendicular to the heme plane than that of P450BSβ. 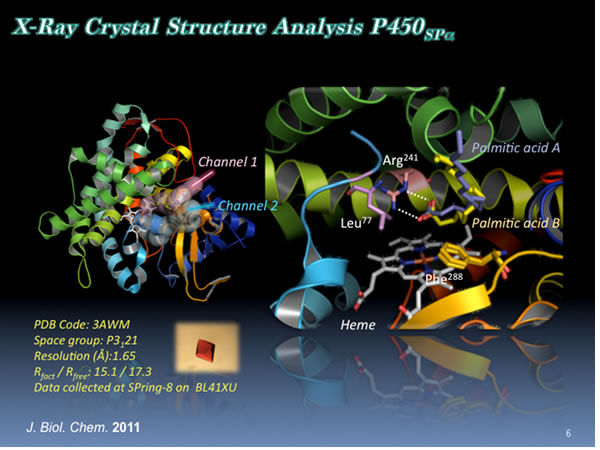