Catalytic hydroxylation of inert C-H bonds under mild conditions has been a major challenge in synthetic chemistry. In particular, hydroxylation of gaseous alkanes has become an increasingly important approach to produce liquid fuel or chemical precursors from natural gas. Biocatalysts offer alternatives to conventional chemical processes for alkane hydroxylations. P450BM3 (CYP102A1) isolated from Bacillus megaterium is one of the most promising enzymes owing the highest monooxygenase activity among P450s reported thus far. The catalytic cycle of P450BM3 is initiated by its substrate (fatty acid) binding to the heme cavity of P450BM3 followed by reductive activation of molecular oxygen to generate a highly active oxidant species, oxoferryl(IV)porphyrin π cation radical, the so-called Compound I. Because the substrate binding is crucial to initiate the catalytic cycle of P450BM3, substrates whose structures are largely different from that of fatty acid cannot be hydroxylated by P450BM3. P450BM3 does not catalyze the hydroxylation of gaseous alkanes, because gaseous alkanes cannot bind to the heme active site of P450BM3. We, however, assume that Compound I of P450BM3 could be formed by adding a “dummy substrate” whose structure is similar to fatty acid. Furthermore, if gaseous alkane molecules could penetrate into the active site of P450BM3 in the presence of such a dummy substrate, gaseous alkane molecules could be hydroxylated. Herein, we report that the addition of perfluoro carboxylic acids (PFs) to wild-type P450BM3 as dummy substrates results in C−H bond hydroxylation of gaseous alkanes to the corresponding alcohols. The hydroxylation reactions of gaseous alkane molecules (propane and butane) and cyclohexane were catalyzed by P450BM3 in the presence of a series of PFs. For the propane hydroxylation, PFC10 gave the highest rate of product formation (67 min-1) and the highest coupling efficiency (18%) among PFs examined. Interestingly, it was noted that smaller alkanes tend to prefer longer alkyl chain PFs for an efficient reaction. 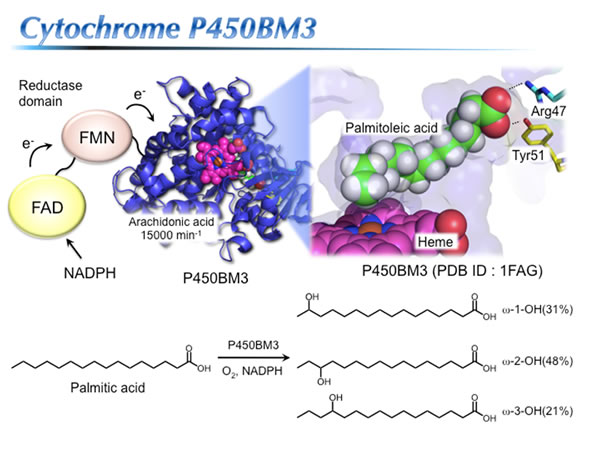 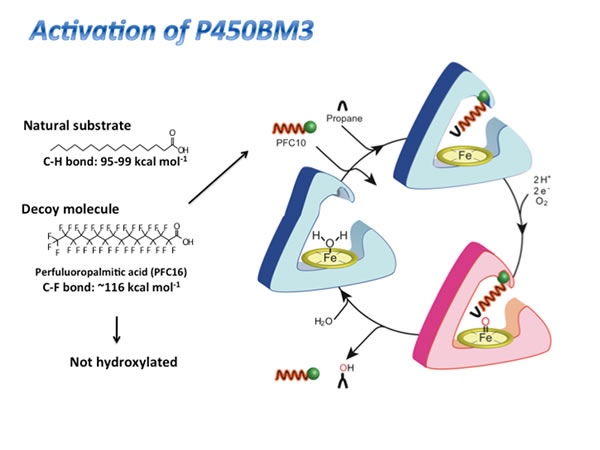 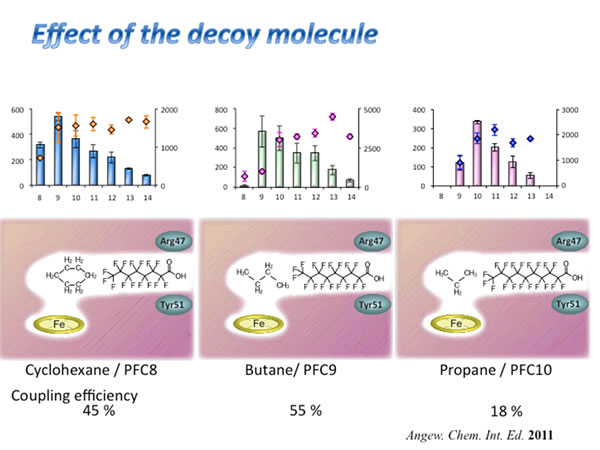