All proteins that control functions in vivo are coded in DNA. In the cell, only a necessary part of DNA is copied (transcribed) into mRNA, and a protein is synthesized (translated) based on the mRNA. Since many diseases are caused by proteins such as protein overexpression or insufficient expression, drug development targeting proteins has progressed. On the other hand, research on nucleic acid drugs has also progressed recently.

We are focusing on peptide nucleic acids (Peptide Nucleic Acid, PNA). PNA is an artificial nucleic acid having an amide bond as a skeleton. DNA having a phosphate ester skeleton is negatively charged, whereas PNA is not charged. Usually, in DNA-DNA duplex formation, repulsion of negative charges between the double strands occurs, but in the case of PNA, there is no charge, so there is no electrostatic repulsion resulting in formation of very stable double strand with the target DNA. Furthermore, PNA has the ability to perform a unique DNA binding “invasion” that is not found in other artificial nucleic acids. In general, DNA forms a stable double helix structure in vivo, and when a general artificial nucleic acid forms double-stranded with a target DNA, natural double stranded DNA should be converted into a single strand by denaturation. Denaturation of DNA double helix requires high-temperature conditions, which is a hindrance to biological applications. On the other hand, PNA can bind to DNA double helix structure itself in an invasion and form an invasion complex, so that it can be expected to be applied in vivo such as nucleic acid medicine. 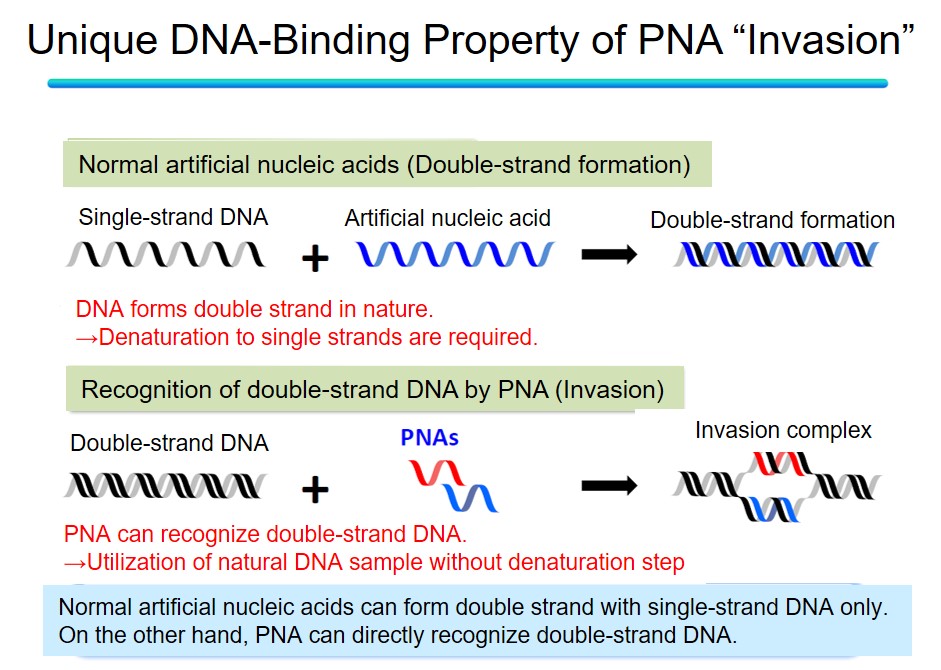 Although PNA has attractive features, there are some problems in application in vivo. One of them is that “invasion efficiency in the in vivo environment is not sufficient”. In vivo environment, the salt concentration is very high, and electric repulsion should be suppressed. For this reason, DNA-DNA duplex becomes stronger and the efficiency of invasion by PNA becomes lower. To solve this problem, we linked a ruthenium complex (Ru (phen) 3), which is known to interact with DNA, with PNA to enhance the DNA-PNA interaction. Interestingly, the invasion efficiency varies depending on the position of the ruthenium complex to be introduced into the PNA and the length of the linker. And with the optimal molecular design, the Ru-linked PNA can invade into the target sequence of double stranded DNA, resulting in formation of a stable invasion complex even in the high salt concentration like in vivo environment. Increasing the binding strength with the target DNA often increases the probability of undesired binding to other than the target sequence, but our designed ruthenium complex-linked PNA also recognizes single-base mismatches and did not completely form invasion complex.

Apart from enhancement of the PNA-DNA interaction by introducing Ru complex, we are also trying to improve the invasion efficiency of PNA into DNA by weakening the PNA-PNA interaction. As mentioned above, because PNA does not have negative charge that causes to electric repulsion seen in DNA-DNA pairs, PNA-DNA can interact stronger than DNA-DNA. However, the interaction between PNA and PNA is much stronger, hindering the invasion of PNA into DNA. To overcome this problem, we developed a cationic guanine (G +) that was synthesized through one-step methylation of natural nucleobases, guanine (G). When G + was introduced into both complementary PNAs, PNA pairs were destabilized due to electrostatic repulsion by G +. Furthermore, we succeeded in strengthening the PNA-DNA interaction in invasion complex by electrostatic interaction between negative charge of DNA and G + in PNA. This novel PNA was named methyl-adducted self-avoiding PNA (masaPNA) by Dr. Masaki Hibino (2019 PhD). 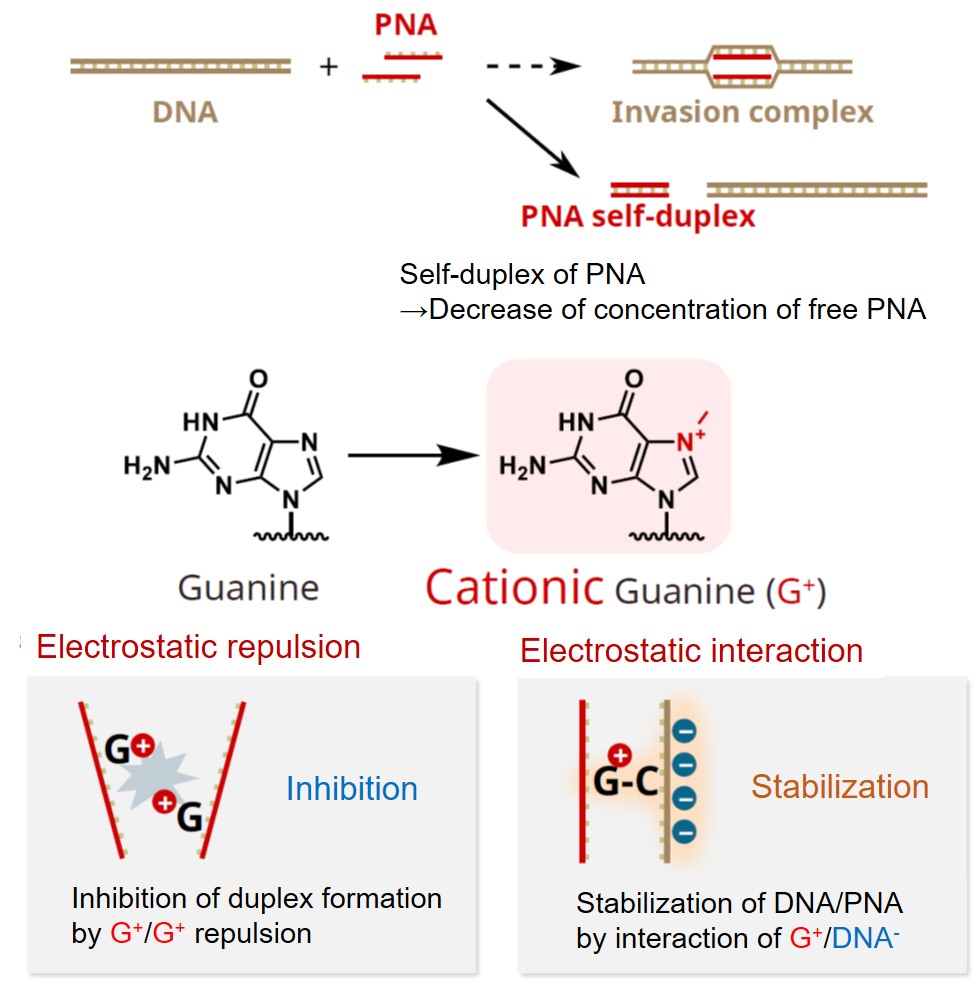 In addition, as a simpler method for stabilizing the invasion complexes by electrostatic interaction, PNAs linked with nuclear localization signal peptides (NLS) were examined in detail. NLS is a short peptide composed of cationic amino acids such as Lys and Arg, and can be easily linked to PNA through peptide bonds. NLS-linked PNA was able to stabilize the invasion complexes of PNA by the electrostatic interaction between the positive charge of NLS and the negative charge of DNA. Interestingly, PNAs with repeated sequences of simple cationic amino acids (ex. polylysine) enhance both specific and non-specific binding to DNA, whereas NLS-linked PNAs maintain can form stable invasion complexes with target DNA with high sequence-specificity. It is possibly because NLS, which has been selected in the process of biological evolution, may have a structure and physical properties suitable for interaction with DNA.

Currently, in addition to further improving the functionality of ruthenium complex-linked PNA, we are also studying the improvement of PNA performance by another method, utilization of Argonaute protein that act as RNA interferance, and are conducting research aiming at application to nucleic acid medicine.