P. aeruginosa also requires iron for growth. Therefore, various mechanisms to acquire iron from the environment have been developed. One of them is called the heme acquisition system (Has), which takes up heme (an iron complex) from heme proteins (eg, hemoglobin) held by hosts such as humans and is used as an iron source. This system is usually used in an environment where the iron source is insufficient. 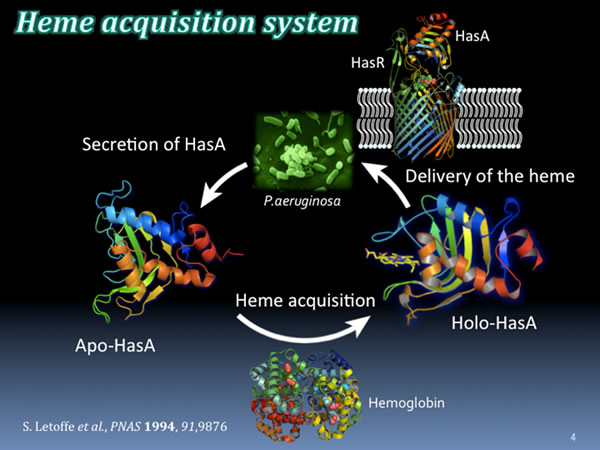 HasA not only has excellent binding affinity to heme, but also has a high resistance to organic solvents, and also has a unique property that the heme binding site is exposed to the outside. Using these properties, we succeeded in complexation of various synthetic metal complexes other than natural heme with apo-HasA. Synthetic complexes that can be captured by HasA are not only porphyrins that have been extensively studied as heme model complexes, but also synthetic complexes with a structure different from heme, such as phthalocyanine, which has a larger plain structure than heme, can be complexed with HasA. HasA can bind with iron phthalocyanine (FePc) that is an artificial synthetic metal complex that does not exist in nature. Interestingly, the protein structure of HasA in FePc-HasA conjugate is almost the same as holo-HasA bound with natural heme. In agreement with holo-HasA, FePc-HasA can also bind to the dedicated receptor HasR of P. aeruginosa. Furthermore, when FePc-HasA was added to P. aeruginosa under iron restriction condition, growth inhibition of P. aeruginosa was observed. This is because FePc has a larger structure than natural heme, so FePc delivered from FePc-HasA to HasR cannot pass along the way, blocking the system of P. aeruginosa heme acquisition.

Currently, metallocomplexes other than phthalocyanine have been successfully combined with HasA, and the range of application has been expanded. One example is complexation of various porphyrin derivatives based on 5,15-diphenylporphyrin (DPP) which has a simplified heme structure. DPP has a relatively high chemical yield in the porphyrin chemistry, and is a highly versatile metal complex for which many derivatives have been developed. We have synthesized DPP with various substituents and succeeded in conjugation with HasA, analysis of crystal structure, and inhibition of growth of P. aeruginosa. The crystal structure of these DPP derivatives and HasA complexes is an important finding that will serve as a design guideline for constructing artificial metal complexes based on HasA.

Recently, even iron and cobalt complexes of tetraphenylporphycene, which have a bulky structure and a ring structure different from the porphyrin ring, have succeeded in complexing with HasA, achieving crystal structure analysis and inhibiting growth of P. aeruginosa. The introduction of complexes with different structures and properties from porphyrins such as porphycenes is expected for the application of artificial metalloproteins using HasA.

Currently, we are studying the application of HasA to photosterilization of P. aeruginosa as a further utilization method. In the above-mentioned FePc-HasA, the receptor, HasR, of P. aeruginosa was blocked, thereby inhibiting iron acquisition of P. aeruginosa and suppressing its growth. But it is just growth inhibition, and P. aeruginosa is not killed after this treatment. Recently, we have succeeded in developing a system that hijacks and sterilizes P. aeruginosa iron acquisition system for further therapeutic effect. The metal complex used in the novel treatment method is a phthalocyanine gallium complex (GaPc) having the function of absorbing red light and generating highly cytotoxic singlet oxygen. When GaPc is complexed with HasA and added to P. aeruginosa, GaPc is introduced into HasA through HasR on P. aeruginosa, similar to FePc-HasA. Upon irradiation of red light to P. aeruginosa in this state, singlet oxygen is generated in P. aeruginosa, and P. aeruginosa can be effectively killed by its toxicity. Its inactivation-efficiency was high, and more than 99.99% of P. aeruginosa could be sterilized by light irradiation for 10 minutes. In addition, P. aeruginosa that has acquired drug resistance by the light sterilization technique using GaPc-HasA was also successfully sterilized. Moreover, humans who are hosts for P. aeruginosa do not have HasR, so they are not damaged by this photosterilization method. Not only that, the HasA-HasR pair has bacteria other than P. aeruginosa, but each bacterium has its own HasA-HasR pair to avoid confusion. Thus, in the case of using P. aeruginosa HasA, it is possible to specifically sterilize only P. aeruginosa without affecting other resident bacteria (such as good bacteria necessary for health maintenance). Research is proceeding toward practical application as an innovative treatment that can treat P. aeruginosa that has acquired drug resistance without side effects.