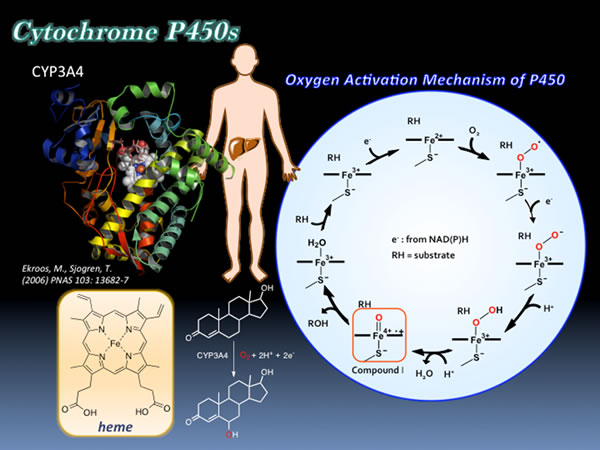 Cytochrome P450s (P450s) are ubiquitous enzymes that comprise a superfamily of heme-containing monooxygenases and involved in oxidative metabolism, detoxification, and synthesis of steroids. P450s have been regarded as attractive candidates for oxidation catalysts because of their high catalytic activity for direct oxygen insertion into unactivated C-H bonds. In general, bacterial cytochrome P450s (P450s) possess high catalytic activity and high substrate specificity at the same time. To utilize bacterial P450s as a biocatalyst for the oxidation of various substrates, we have to alter their substrate specificity. Although site-directed and random mutagenesis have been regarded as one of the most powerful approach to change the substrate specificity of P450s, we recently have demonstrated that the substrate specificity of hydrogen peroxide-dependent P450s (P450BSβ and P450SPα) can be altered just by adding a decoy molecule, which has a structural similarity to their natural substrate. In this reaction system, the decoy molecule induced substrate misrecognition and non-natural substrates were oxidized by P450BSβ and P450SPα without replacing any amino acid residues. More recently, we have expanded this substrate misrecognition system to include P450BM3. Utilizing perfluorinated carboxylic acids as a decoy molecule toward P450BM3, we have succeeded in hydroxylation of propane and butane. Interestingly, the catalytic activity of P450BM3 are dependent on the alkyl chain length of perfluorinated carboxylic acid and perfluorinated decanoic acid gave the highest rate of product formation for propane hydroxylation among perfluorinated carboxylic acids examined. These results indicate that the substrate specificity can be changed by adding decoy molecules and the catalytic activity can be controlled by the choice of decoy molecule.

Chapter 2: Functional modulation of P450BM3 using decoy molecule and its application to biocatalyst

Chapter 2 Episode 4: Control of stereoselectivity in hydroxylation by decoy molecules

Chapter 2 Episode 7: Development of a high-pressure reactor and efficient hydroxylation of gaseous alkanes

Chapter 2 Episode 10: Control of stereoselectivity in non-native reactions by combined use of decoy molecules and mutagenesis

Please refer to this paper for details about alteration of P450's function.